One hundred days at the Sanremo Challenge: with the presentation at the Town Hall, the countdown to the first edition starts

On a surely important date (100 days to the event), the first edition of Challenge Sanremo was officially presented. The “Sala Giunta” of the Municipality of Sanremo hosted the event that marks the start of the countdown of the event that will take place on the Riviera, on the days of 23, 24 and 25 September. One hundred days at the start of the Italian stage of the Challenge Family Circuit which will attract hundreds of Italian and international athletes from five continents: the location, with a strong tourist vocation, the good position in the international calendar, the captivating and demanding courses, represent important attractions for triathletes, the naturalistic beauties of the Riviera, the pristine green of the Ligurian hinterland, the crystal clear water and the uniqueness of the cycle / pedestrian path will make the sports weekend organized by the Riviera Triathlon 1992 unforgettable.

The program includes three days of competitions. On Friday 23 September the Swimrun will open the busy competitive calendar with a test of 11,250 km (run: 8.7 km, swim 2.55 km). On Saturday 24 September, starting at 10:30, the sprint triathlon is scheduled on the tested course of recent years while in the afternoon, from 14, the youth competitions return, a constant on the Sanremo “lungomare”, which in recent years has welcomed thousands of “green’” triathletes for the Italian Championships and the Coppa delle Regioni. On Sunday, the Challenge Sanremo debut on middle distance, 1.9 km of swimming, 90 km of cycling and 21 km of running. Departure at 8:20 am.

The routes, already unveiled in recent weeks, have aroused the curiosity of Italian and foreign athletes. With over 150 registrations already received, it is estimated, will reach over 1000 units for the first edition of the event.

Speaking of courses, tomorrow, Saturday 18 June, there will be a guided tour of the cycling course: there will be about thirty triathletes and passionate cyclists in addition to the Italian Champions Gregory Barnaby (recently winner at the Bardolino Triathlon) and Giorgia Priarone (last Sunday silver in the relay at the Duathlon World Championships), who will be at the starting line of Challenge Sanremo on 25 September, as will Vittoria Bergamini, “captain” of the 1992 Riviera Triathlon.

Meanwhile, the volunteer recruitment campaign continues. The availability of the Liceo Gian Domenico Cassini in Sanremo has already been confirmed, which has activated a collaboration with Challenge Sanremo to offer students in the fourth and fifth grades the opportunity to carry out an interesting and formative adventure in the staff of an international event. With great enthusiasm, the “Dirigenza e il Dipartimento di Scienze Motorie” courses’ accepted the request of the Riviera Triathlon 1992 sports club, confirming the availability of many young student, ready to live a new experience during the rich sports weekend of 23, 24 and 25 September.

Challenge Sanremo will also carry out a Charity project. Thanks to the initiative of Sabrina Schillaci, who will compete in the middle-distance event after having made the trip from Milan to Sanremo by bicycle. Visibility will be given to her fundraiser

for the purchase of some machinery (pulse oximeters and cardiomonitors) for the pediatric department of the Imperia hospital. In addition to donating part of the registrations to this initiative, a fundraiser will be activated through the Active platform which will be advertised on the official website of the event.

“This year we celebrate the 30th anniversary of the birth of the Riviera Triathlon 92 and to pay homage to this important milestone, this virtuous sports association has received the gift of bringing the Sanremo Triathlon into the Olympus of international competitions of this sport. Here we are proud to present the first edition of the Challenge Sanremo which becomes the last destination of the prestigious Challenge Family. The race of this medium distance, also known as half ironman, will take place in the enchanting setting of the renowned city of western Liguria, capable of offering a very competitive course of 1.9 km of swimming in the bay in front, as a prelude to the 90 km by bicycle very difficult with a challenging altitude difference, to then conclude with the half marathon and its 3 7 km loops along the cycle / pedestrian path. This Triathlon race confirms, with its entry into the Challenge Family, how much our region is predisposed to sports tourism where athletes, technicians and simple travelers can enjoy excellent hospitality and an absolutely favorable climate”, said  Simona Ferro, Councilor for Sport of Liguria Region.

“Sanremo Triathlon is now part of the Challenge Family, an international circuit which consists of races in the most renowned locations around the world closely tied to tourism and triathlon: a prestigious achievement, for an event that has grown over the years, with ever increasing success and attendance. Sanremo welcomes this new edition with enthusiasm, once again offering an exclusive course. Thanks to the organiser for the job done and a warm welcome for the people who will come to our city”, said Alberto Biancheri, Mayor of the Municipality of Sanremo.

“Sanremo continues to be the stage of important sports events, due to its character and uniqueness. Triathlon perfectly unites both tourism and sport, building on some of the attractive features of our region, making it an ‘open air gym’. Thanks to this event, once again we are strengthening the image of Sanremo as a sports destination”, said Giuseppe Faraldi, Tourism Councillor of the Municipality of Sanremo.

“Congratulations to Riviera Triathlon 1992 for the important work done over the past 30 years, which has allowed them to reach important and higher achievements. As a fan, I can say both triathlon and the “newcomer” swim-run, are very strong and appealing events, able to unite both intensity and variety in the effort. Challenge Sanremo will deliver all of these, with spectacular scenery: the beauty of our city”, said Massimo Rossano, Budget Councilor of the municipality of Sanremo.

“The history of the Sanremo Triathlon began in 2000 and, after 21 editions, the last of which with 1640 starting athletes turned out to be the most participated sporting event in Liguria and the 4th most participated triathlon event in Italy, we are here to announce officially the entry of this event into the prestigious Challenge Family circuit 100 days from the start, with pleasure and pride we present the Challenge Sanremo: for us at the Riviera Triathlon 1992, small but important sport club, it will be an important challenge, a great organizational effort that with the help of the institutions, sponsors, numerous work groups and volunteers we will face with enthusiasm and dedication, with the aim of giving our city and to the municipalities interested in an event of great international caliber. We will organize this race for six years during which we will constantly pursue a growth objective, both qualitative and quantitative”, said Daniele Moraglia, Challenge Sanremo race director.

“We are delighted to work with Daniele and the team to bring what promises to be a spectacular race to the region. Challenge Sanremo encompasses the best of this beautiful area of Italy over 113km of swim, bike and run, as well as including some already iconic cycle routes. We know this will be a race that will benefit the local community and also one they can be proud of. We look forward to introducing many more international triathletes to this stunning region over the coming years, starting on 25 September 2022”, said Jort Vlam, CEO of Challenge Family.

“It is with great pleasure that we have decided to collaborate, as a business network, with the sports association Riviera Triathlon 1992. With its president Daniele Moraglia we are united by the enthusiasm of doing things and the love for our city. And of course the sport. The Canottieri Sanremo, now the Riviera Triathlon, has already entered Sanremo On. For years, we have also been organizing the bike Transalp along the Via del Sale, an event that in July will also have a new and important outlet in Sanremo. We are always ready to collaborate for the good of the city”, said Roberto Berio, president of Sanremo On.

Bike. 1 lap of 90 km. Single lap. Exiting the first transition area, the participants will ride along the Cycle and Pedestrian Path of the ¨Coastal Park¨ of Ponente Ligure, heading east, up to Riva Ligure, before transiting onto the Aurelia. A few hundred meters in the town of Santo Stefano al Mare separate the triathletes from the first climb: turn left and climb towards Terzorio, Pompeiana and Castellaro. The slopes are not prohibitive and make this first ascent very easy to pedal: only in the last part, 10% is reached. Afterward, we descend towards Taggia, before starting to gain altitude again. A slight slope follows the course of the Argentina torrent, crossing the town of Taggia before begin a long climb of 17 km that leads to the Ghimbegna pass (1030 m altitude), after having crossed Argallo, Zerni and Vignai. The positive difference in height, which touches 1500 meters, is over: now we descend towards sea level from Bajardo, Ceriana and Poggio di Sanremo, facing the famous descent of the Classicissima Milano-Sanremo in the final. Map: https://www.strava.com/routes/2959490758657755792

Run. 3 laps of 7 km. The run part is flat and flowing, which will take place in the section of the cycle / pedestrian path between Sanremo and Ospedaletti which involves crossing the Capo Nero tunnel and offers a wonderful sea view. Map: https://www.strava.com/routes/2946435544179956884

Bike. 1 lap of 20 km (draft legal). The first part of the route is on the cycle / pedestrian path up to the start of Bussana. Here the first ascent of the route that ends at an altitude of 70 meters inside the town, at the top of via Circonvallazione. The steep descent brings the triathletes back to the Aurelia: from here they will tackle the most famous 10 km of world cycling: the famous Poggio climb. The climb is very easy to pedal (4% the average gradient), follow by the technical and fast descent that leads to Sanremo and the second transition area. Map: https://www.strava.com/routes/2946432349653730452

11,250km is the total distance of Swimrun race, 8.7km running and 2.55km swimming. The start line is located at Lido Imperatrice, the finish line of the Challenge Sanremo middle distance race. Details and distances: https://challenge-sanremo.com/swimrun/

Celebrating 20 years of Challenge in 2022 and with over 30 long and middle distance triathlons around the globe featuring spectacular courses in iconic destinations, no Challenge Family race is like any other. Focusing on delivering the race of a lifetime to athletes of all ages and abilities, Challenge Family races provide unforgettable experiences that capture all the excitement and emotions of this inspirational sport for competitors, friends, family and supporters alike. #AllAboutTheAthlete #WeAreTriathlon 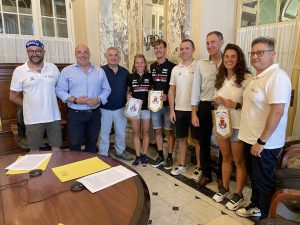 One hundred days at the Sanremo Challenge: with the presentation at the Town Hall, the countdown to the first edition starts2022-06-172022-06-17http://www.challenge-family.com/sanremo/wp-content/uploads/sites/45/2022/03/cs-horizontal-rgb.pngChallenge Sanremohttps://challenge-sanremo.com/wp-content/uploads/sites/45/2022/03/2-porto-sanremo.jpg200px200px
Latest news
Partners 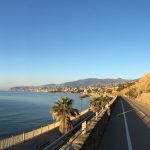 Breathe the atmosphere of the Challenge Sanremo: come with us to try the cycling courseNews 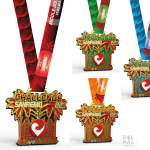 Another reason to sign up for the Challenge Sanremo? The amazing finisher medalNews