Challenge Sanremo: registrations open on Monday 11 April. Here are the courses of the Middle Distance race on 25 September and of the sprint distance

The countdown towards the opening of registrations is almost over. From Monday 11 April, athletes from all over the world will be able to register for the first edition of Challenge Sanremo on the official website of the event (www.challenge-sanremo.com).

A few days after the activation of the registration platform, the Organizing Committee of the Sanremo international event which will take place on the weekend of 23, 24 and 25 September unveils the courses of the Middle Distance test (Sunday) and the triathlon sprint (Saturday) .

“Challenge Sanremo is taking shape – underlines Daniele Moraglia, President of Riviera Triathlon 1992, head of the organizing committee and race director of the Challenge Sanremo – we have outlined the courses of the medium-distance race and of the sprint triathlon so, in a few days from the opening of registrations, athletes can start studying the challenging tracks”.

Cycling. 90 km, single lap. Exiting the first transition area, the participants will ride along the Cycle and Pedestrian Path of the ¨Coastal Park¨ of Ponente Ligure, heading east, up to Riva Ligure, before transiting onto the Aurelia. A few hundred meters in the town of Santo Stefano al Mare separate the triathletes from the first climb: turn left and climb towards Terzorio, Pompeiana and Castellaro. The slopes are not prohibitive and make this first ascent very easy to pedal: only in the last part, 10% is reached. Afterward, we descend towards Taggia, before starting to gain altitude again. A slight slope follows the course of the Argentina torrent, crossing the town of Taggia before begin a long climb of 17 km that leads to the Ghimbegna pass (1030 m altitude), after having crossed Argallo, Zerni and Vignai. The positive difference in height, which touches 1500 meters, is over: now we descend towards sea level from Bajardo, Ceriana and Poggio di Sanremo, facing the famous descent of the Classicissima Milano-Sanremo in the final.
Map: https://www.strava.com/routes/2959490758657755792

Run. 21 km, 3 laps of 7 km. The run part is flat and flowing, which will take place in the section of the cycle / pedestrian path between Sanremo and Ospedaletti which involves crossing the Capo Nero tunnel and offers a wonderful sea view.
Map: https://www.strava.com/routes/2946435544179956884

Cycling. 20 km, single lap. The first part of the route is on the cycle / pedestrian path up to the start of Bussana. Here the first ascent of the route that ends at an altitude of 70 meters inside the town, at the top of via Circonvallazione. The steep descent brings the triathletes back to the Aurelia: from here they will tackle the most famous 10 km of world cycling: the famous Poggio climb. The climb is very easy to pedal (4% the average gradient), follow by the technical and fast descent that leads to Sanremo and the second transition area.
Map: https://www.strava.com/routes/2946432349653730452 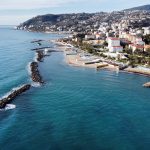