On the Lungomare Vittorio Emanuele II it is a real Italian triathlon festival. Waving the flag on the first edition of the Challenge Sanremo organized by the Riviera Triathlon 1992: an amazing Gregory Barnaby wins an extraordinary victory in the middle distance (1.9 km of swimming, 90 km of cycling, 21 km of running) with a sensational comeback in the final of the race. Second step of the podium for the French William Mennesson, third place for his compatriot Simon Viain.

Among the women, the favorite of the eve, the Swiss Emma Bilham, climbs on the top step of the podium in front of the French Justine Guerard and Jeanne Collonge.

Spectacular start moment on the Sanremo beach illuminated by a summer sun. Barnaby immediately protagonist of the competition in the water with a fraction closed in third place just behind Viain. As expected, it was the 90km of cycling that defined the situation. As the kilometers went, Mennesson returned to the lead before taking the P1 and finishing first in the second transition. Already in T2, the medals seemed to be already assigned: the final race, just in the last kilometers, decided the placings with Barnaby author of a very long sprint that let him fly towards this extraordinary success in front of the French couple Mennesson-Viain.

Siffert and Guerard were the fastest in the swimming leg with Bilham a little bit in late in the water but ready to manage the comeback in the two most favorable stages. In fact, the Swiss athlete leaps to the lead after the first bicycle ramps and she will no longer be overtaken by anyone. Berlinger, Guerard and Derron swap positions along the remaining cycling kilometers engaging in a splendid fight for medals. While for Bilham the race is a catwalk towards the finish line, for the girls fighting for the podium the final 21 km will be decisive. The French Guerard seems to be in the best form behind Bilham and defends the second position while from behind Jeanne Collonge, author of the best set in the run fraction, climbs up to the third position.

After the best, a festive roundup of arrivals from all the Age Groupers that have competed into such a challenging race, but completely immersed in the wonderful views of the Riviera dei Fiori that all the world has been able to appreciate thanks to the full live streaming.

It was a party, a great … challenge from which everyone emerged as winners. 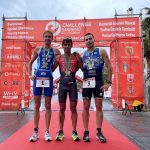 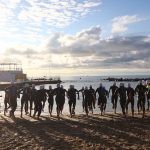